What we do and don’t know about kindnessShare using EmailShare on TwitterShare on FacebookShare on Linkedin(Image credit: BBC Radio 4)

By Claudia Hammond21st September 2021In recent years, psychologists have gained a deeper understanding of human kindness and its benefits, but as Claudia Hammond writes, there’s still so much to explore.S

Since the pandemic began, people tell me they’ve been thinking a lot more about kindness. Maybe they’ve noticed the mutual aid groups that have sprung up around the world to help during lockdowns, or perhaps it’s because the cessation of normal everyday life has forced them to reconsider their values and what really matters in life.

Kindness might once have been considered something of a soft topic, but it has begun to be taken seriously within academic research. When developmental psychologist Robin Banerjee – who is leading a new study on kindness in partnership with the BBC – surveyed past research, he found just 35 papers on kindness in psychology journals in the whole of the 1980s. In the past decade, there were more than 1,000.

But there is still plenty to discover, so the BBC has just launched a huge online public science project called the Kindness Test, in collaboration with a team from the University of Sussex in the UK. It’s open now and many thousands of people from all over the globe have already completed it. The hope is that this research will start the process of obtaining a fuller picture of kindness in today’s world.ADVERTISEMENT

Here’s what some of those thousand research papers can already tell us, and what is still to be discovered:

WHAT WE ALREADY KNOW

One morning, people walking down a street in the Canadian city of Vancouver were asked to take part in an experiment run by the American psychologist Elizabeth Dunn. They were given an envelope containing either a $5 or $20 note. Half the people were instructed to spend the money on themselves. The other half were instructed to use the money to buy a present for someone else or to donate the money to charity. In both cases, they had until 17:00 that day to spend the money.

What role does kindness play in your life? Join our study and help us to understand your experiences.

The Kindness Test is designed to explore everyday kindness. Most people would probably say they have a good idea about what it means to be kind and what it feels like to give and receive kindness. But we want to better understand what it is, where and when it is experienced, and what impact it has. Our goal is to explore how people’s perspectives might vary across different groups, and how kindness might relate to health, wellbeing, and other social and psychological experiences. Visit thekindnesstest.org before 4 October 2021 to complete our questionnaire.

That evening, the researchers spoke to all the participants. The first group said they’d bought a variety of things for themselves, such as sushi, earrings and coffee. People from the second group bought toys for their relatives, edible gifts or gave money to homeless people in the street. Then the researchers asked each participant to rate their mood.

Whether they had $5 or $20 made no difference, nor did what they bought. What mattered was who they spent their money on. The people who had spent it on someone else felt significantly happier than those who treated themselves.

Neuroscientific research confirms that the warm glow we experience when we do something nice for someone shows up in our brain’s reward system.

Speaking to me on the BBC radio programme The Kindness Test, Sussex University neuroscientist Dan Campbell-Meiklejohn told me that this can seem counterintuitive. “Kindness can cost us, yet we experience a sense of reward in parts of our brain when we are kind to others, just as we do when eat yummy food or have a pleasant surprise. These parts of the brain become active and motivate us to do them again and again.”

Kind acts can have a ripple effect. Just hearing that someone else has behaved kindly can motivate us to do the same. In a now classic study of social norms by Robert Cialdini and his colleagues, when a notice in a hotel bathroom told people that the majority of guests choose to reuse their towels, the more likely they were to be kind to the planet and keep their towels instead of having them replaced with fresh ones. 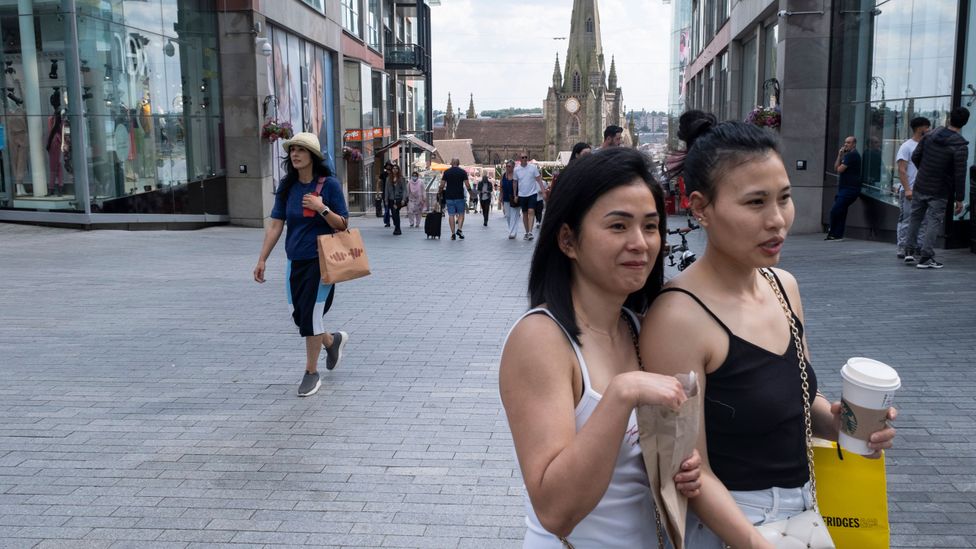 Shoppers who bought something for others felt better afterwards compared with those who bought for themselves (Credit: Getty Images)

Many different lab studies have found that people “pay it forward”, if they receive kindness they are then kinder to others. For example in a study by Monica Bartlett back in 2006, people were asked to complete a dull task on a computer before it was “accidentally” unplugged. For some participants, a stooge would kindly sort out the problem for them, saving them from wasting time starting all over again. The other half of the participants were shown a funny film instead. Those on the receiving end of kindness were more likely to agree to help the experimenters by taking part in another study.

It should be noted that later research has shown that paying it forward isn’t always positive. Greed, as well as kindness, can be paid forward to complete strangers too.

When students who experience social anxiety were asked to perform acts of kindness for four weeks, such as doing their roommate’s washing up or donating to charity, their social anxiety and desire to avoid social situations was reduced, compared with a group who weren’t asked to do the kind acts.

Jennifer Trew from Simon Fraser University, who conducted the study, believes acting kindly may have helped the students to have more positive expectations about social situations, instead of dreading them. It was notable that the biggest effect was at the start.

Even toddlers can be kind

Toddlers are of course famous for their tantrums. We tend to assume that at such a young age they can never understand another’s perspective. They often appear unmoved if their sibling howls in distress, but experiments show that they are capable of kindness.

In one study, a researcher is hanging up washing, but then runs out of pegs. Meanwhile, it’s been arranged that the toddler playing nearby opens a box, finding either another peg, a marble to use in their own game or a useless piece of plastic. Digital analysis of their body language showed that on the whole they were just as delighted to find the peg for the researcher as they were at finding the marble for themselves. Research with older children and teenagers has also found a capacity for kindness. 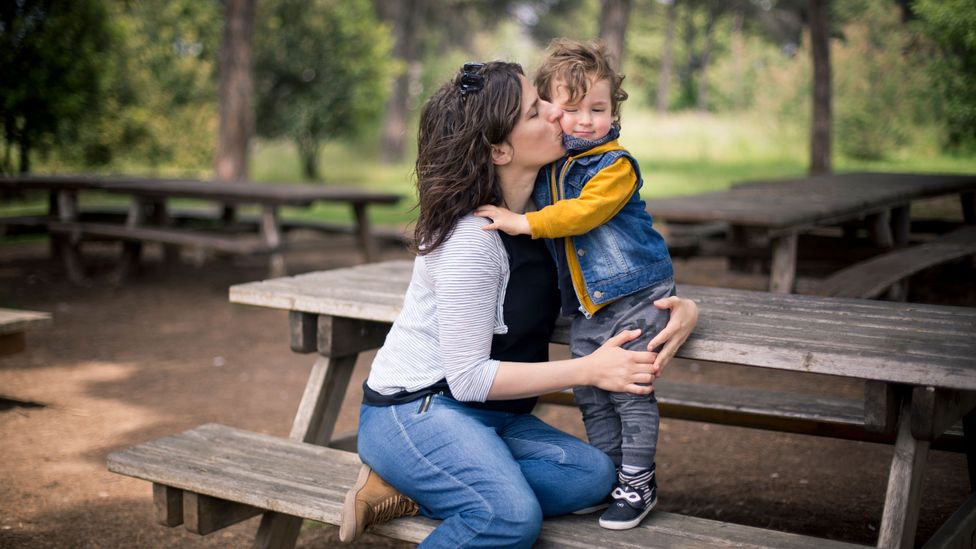 WHAT WE WANT TO KNOW

So there is plenty that we already know about kindness from experiments conducted in the lab. These studies are sometimes small, but when put together a picture of the state of the kindness starts to emerge. Yet even some of those working in the field have argued that the whole idea of kindness still needs to be unpacked and that more research is needed on how individuals differ in their kindness, and how it impacts societies.

Our research project, the Kindness Test, looks at the place of kindness in everyday life. and these are among the many questions it addresses:

What are the most common kind acts that people carry out?

Is the most common act of kindness picking up something a stranger has dropped, giving money to charity, paying someone a compliment, or maybe something else? And who do we tend to be kindest to?

Neuroscientific research shows that our brains have a different emotional response to news stories of others coming to harm, depending on where in the world those people are. “It takes many more people abroad to have the same effect as a story about a single individual at home,” says Dan Campbell-Meiklejohn. “So some charities and age groups have a massive challenge to overcome our emotional responses and to get support to those people that need it the most.”

So how does this play out in everyday life?  Are we kindest to friends and family, to people like us or to strangers? 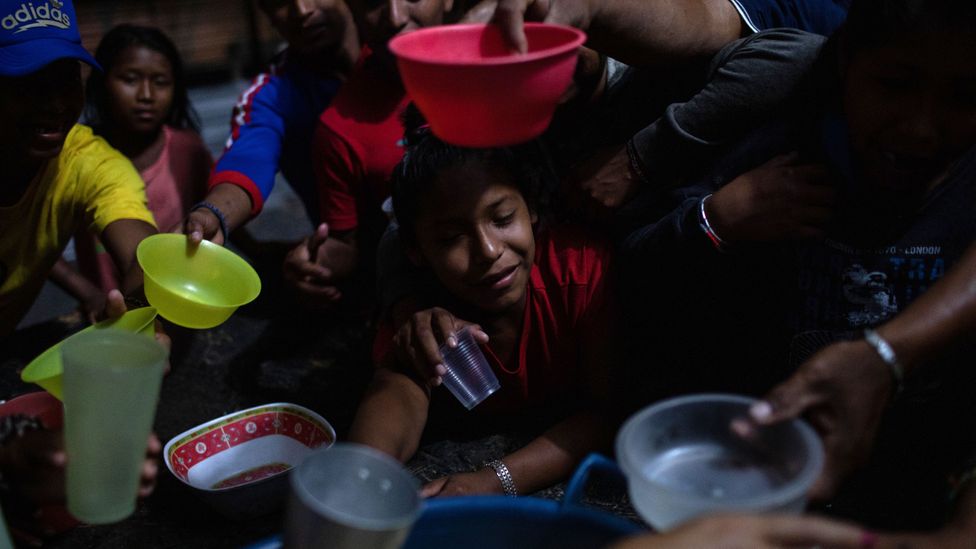 Compassion is easier when people are close by (Credit: Getty Images)

Where do people most often experience kindness?

In their homes? Out in the street in the city? In the countryside? Or maybe at work? A huge sample of people is needed in order to answer this kind of question.

How is kindness viewed at work?

In the cut-throat world of business, is there a place for kindness? Hopefully we’ve all worked with kind people, so we know kind acts do take place at work, and many of us wouldn’t have survived in our jobs without colleagues showing us the ropes. But is kindness viewed as a strength at work and encouraged, or perceived as a weakness which could lose you your competitive edge?

What prevents us from being kind?

We all know that kindness can be a good thing and many of us try to be kind when we can. But it’s not always easy. So what are the barriers to being kinder? Is it that we don’t notice when someone needs something, that we’re afraid of looking weak, or perhaps with strangers we’re embarrassed to offer help in case they don’t need it or we’re mistaken about a situation, or we’re just too shy to speak at all? Perhaps with Covid-19 around us, we prefer to keep our distance? There could be all sorts of reasons preventing us from being kinder. Or is it that we’re just selfish and not bothered?

HOW TO TAKE PART

The Kindness Test asks for your views on kindness. There are no right or wrong answers. If you fill it in, at the end you get a sneak preview of some of the results so far. Please go to thekindnesstest.org to take part.

And thank you to the thousands who already have. You’re very kind.

*Claudia Hammond is the presenter of The Kindness Test on BBC Radio 4 and visiting professor of the public understanding of psychology at the University of Sussex.