‘More problems ahead’: Ex-prosector says it’s not over for Avenatti

Biden defends pulling US out of Afghanistan as Taliban advances

Why these paintings are sparking ethics concerns for Biden

See the moment a tornado tore through this city

Data identifies 5 undervaccinated clusters in the US. See where they are

CNN reporter: No spectators at Olympics a ‘huge disappointment for Japan’

What this concrete sample could reveal about condo collapse

Gunman opens fire on couple at Downtown Aquarium in Houston

‘More problems ahead’: Ex-prosector says it’s not over for Avenatti

Biden defends pulling US out of Afghanistan as Taliban advances

Why these paintings are sparking ethics concerns for Biden

See the moment a tornado tore through this city

Data identifies 5 undervaccinated clusters in the US. See where they are

CNN reporter: No spectators at Olympics a ‘huge disappointment for Japan’

What this concrete sample could reveal about condo collapse

Gunman opens fire on couple at Downtown Aquarium in Houston

(CNN)Another relentless heat wave is expected to grip the West this weekend. The extreme conditions in the forecast have prompted the National Weather Service (NWS) to categorize much of California and Nevada in the highest heat risk level by Sunday.Over 30 million people are under heat alerts across the western states as temperatures are forecast to soar well into the triple digits this weekend, threatening to break daily high-temperature records.

Historic Northwest heat wave ‘virtually impossible’ without human-caused climate crisis, study findsNearly the entire state of California will be impacted by this heat wave, in addition to the major metro areas in the Southwest.

“Numerous daily high temperature records could be in jeopardy of being broken, particularly for California and Nevada. Highs could approach 115-120 degrees for the lower elevations of Arizona and eastern California this weekend,” the Weather Prediction Center (WPC) said on Friday.

Death Valley could even reach 130°F or higher on Sunday and Monday, coming close to the hottest temperature ever recorded on Earth, which was 134°F at the same location in 1913.

Check how hot will it be in your area >>>Las Vegas has the potential to set a new high-temperature record Friday and again through the weekend. The current all-time high is 117°F, and the NWS is forecasting 116°F, 118°F, and 117°F as high temperatures today through Sunday. Sacramento, California, has the chance to break its all-time high temperature of 114°F this weekend.

A “Very High” heat risk level (4 out of 4) has been issued across a widespread area of the Southwest. The heat risk includes much of California and Nevada and portions of northwestern Arizona and southwestern Utah. Cities such as Sacramento, Bakersfield, Las Vegas, Palm Springs, and Phoenix.”Heat Risk values on Saturday and Sunday are widespread ‘Very High’ … ‘Very High’ means that the entire population is at a very high risk of heat-related illness due to both the long duration heat, and the lack of overnight relief,” the National Weather Service (NWS) office in Las Vegas said on Friday.https://platform.twitter.com/embed-holdback-prod/Tweet.html?dnt=false&embedId=twitter-widget-0&features=eyJ0ZndfZXhwZXJpbWVudHNfY29va2llX2V4cGlyYXRpb24iOnsiYnVja2V0IjoxMjA5NjAwLCJ2ZXJzaW9uIjpudWxsfSwidGZ3X2hvcml6b25fdHdlZXRfZW1iZWRfOTU1NSI6eyJidWNrZXQiOiJodGUiLCJ2ZXJzaW9uIjpudWxsfSwidGZ3X3R3ZWV0X2VtYmVkX2NsaWNrYWJpbGl0eV8xMjEwMiI6eyJidWNrZXQiOiJjb250cm9sIiwidmVyc2lvbiI6bnVsbH0sInRmd190ZWFtX2hvbGRiYWNrXzExOTI5Ijp7ImJ1Y2tldCI6ImhvbGRiYWNrX3Byb2QiLCJ2ZXJzaW9uIjo3fX0%3D&frame=false&hideCard=false&hideThread=false&id=1413242989875499018&lang=en&origin=https%3A%2F%2Fwww.cnn.com%2F2021%2F07%2F09%2Fweather%2Fsouthwest-heat-wave-forecast-friday%2Findex.html&sessionId=89a28a4dc54dc60fe1a04e0d7276bf53f5b64a13&theme=light&widgetsVersion=82e1070%3A1619632193066&width=550pxOvernight temperatures will provide little to no relief, with some areas experiencing low temperatures in the 90s.”Similar to the June heat wave recently experienced, minimum temperatures will also play a major role in heat impact potential. Several locations are looking to set daily high minimum records potentially from Saturday through Monday,” said NWS Las Vegas.Las Vegas has a record minimum temperature of 95°F, which the NWS has given a one in four chance of reaching on Saturday morning.The forecast for Saturday in Las Vegas includes a high of 116°F and a low of 93°F, giving an average daily temperature of 104.5°F which has only happened two other times, in 2013 and 2005, and has only been exceeded once in 2005, according to NWS Las Vegas.“Expect oppressive heat for the entire region, including mountain communities where low 90s are forecast,” said NWS Reno.Heat alerts cover most of the West, with excessive heat warnings sprawling six states in the Southwest, many in effect through Monday. Almost the entire state of California is included in heat alerts, apart from the coastal regions. 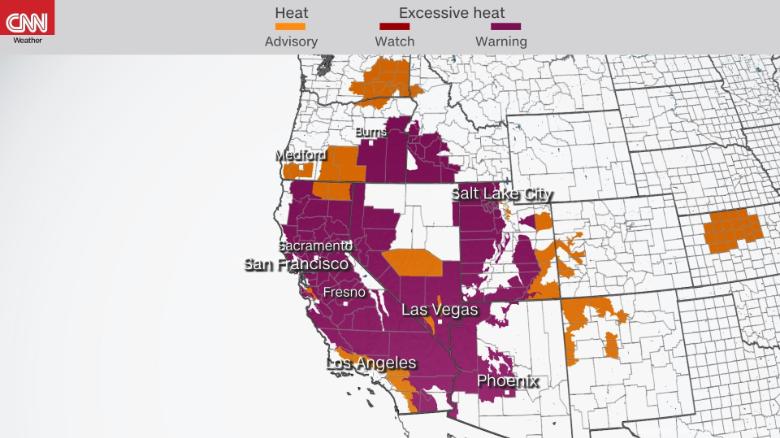 Heat alerts cover the West this weekendIn preparation for the extreme heat wave, a California power grid operator is asking residents to conserve power across the state.The California Independent System Operator (ISO) said in a news release Thursday, “extreme temperatures across much of California” could cause a “potential capacity shortfall on the state’s electric grid.”If power demands surpass supplies, rolling blackouts could be put in place across the state, causing a dangerous situation in the relentless heat.

It’s ‘inescapable’: Pacific Islanders have tried to flee the climate crisis, only to face new threatsIt is crucial to have access to air conditioning and a way to get relief from the heat during prolonged heat waves. The NWS frequently includes guidance about hydrating, staying cool, and realizing the dangers of the heat that doesn’t subdue during the night.”Drink plenty of fluids, stay in an air-conditioned room, stay out of the sun, and check up on relatives and neighbors,” the NWS in Hanford, California, advises.The experimental “Heat Risk” forecast was created by the NWS to address the ways heat affects different parts of the population and allows the public to prepare for heat events.”This product is supplementary to the official NWS heat watch/warning/advisory program and is meant to provide continuously available heat risk guidance for those decision makers and heat sensitive populations who need to take actions at levels that may be below current NWS heat product levels,” said the NWS. 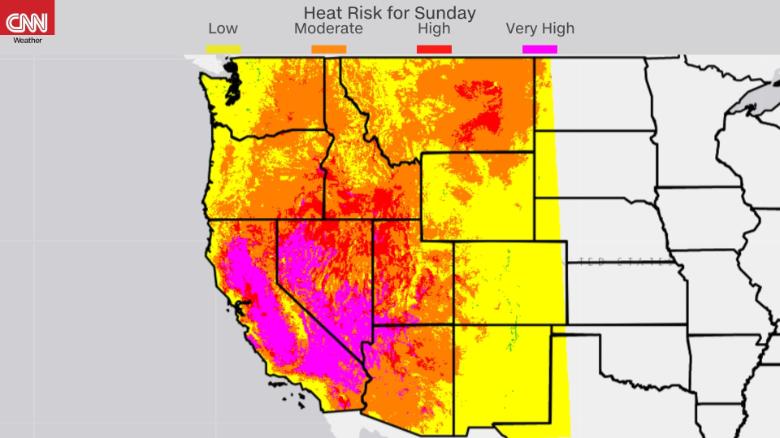 Very high heat risk in much of the Southwest from NOAA NWSThe system uses a numeric 1-4 rating and a color scale like that of the Air Quality Index or UV Index.

“In a similar way, it provides one value each day that indicates the approximate level of heat risk concern for any location, along with identifying the groups who are most at risk,” the NWS said.The “Very High” rating for much of California and Nevada this weekend means that the entire population in the area is at significant risk for heat illness.