‘It’s as though a car and a bike had a baby,’ says Veemo project manager 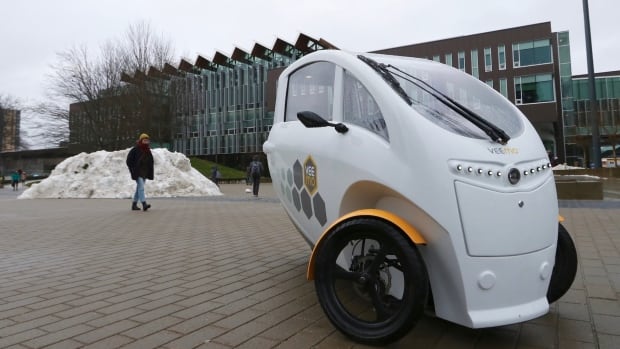 The Veemo vehicles didn’t originally have windshield wipers, but they were recently added after some testing through the rainy months. (Rafferty Baker/CBC)

The University of British Columbia campus is serving as a testing ground for a small fleet of rentable electric-assist pedal tricycles.

The single-person vehicles have been deployed as a pilot program by the Vancouver-based company VeloMetro. The company calls the machines and the associated app Veemo.

“It’s as though a car and a bike had a baby,” said Tanya Paz, the project manager for the UBC Veemo pilot program.

“It’s covered, so eventually you won’t need a helmet and on a [rainy] day like today, you’re not messing with your coif,” said Paz. 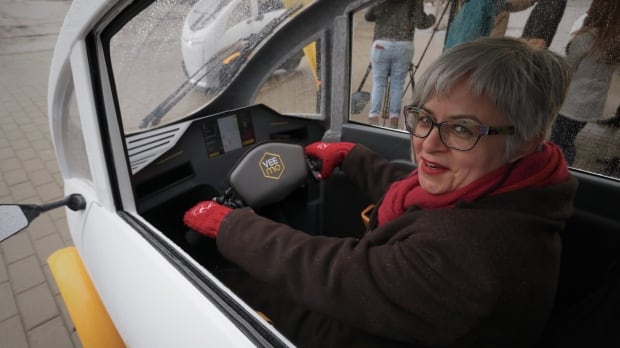 The system works like many car services, including Car2Go and Evo; you access the enclosed vehicle by activating it with the phone app. It bills the user by the minute, and Paz says it costs about two-thirds as much as one-way car services.

The controls for the vehicles, which weigh about 120 kilograms, are similar to any bicycle — there are pedals and a handlebar with brakes.

But it has a touch-screen interface to toggle controls like windshield wipers, pedal speed, and how much boost you get from the batteries. There are buttons on the handlebar to signal your turns.

There are currently five available vehicles to use within a limited section of the UBC campus, says Paz.

She said the company is looking for investments from venture capitalists and hopes to expand the fleet to as many as 50 vehicles in the next few months, and then perhaps extend the zone beyond campus later this year.

While VeloMetro uses the pilot to drum up investment, gain users and improve its vehicles, a team at UBC is using Veemo data to carry out research. 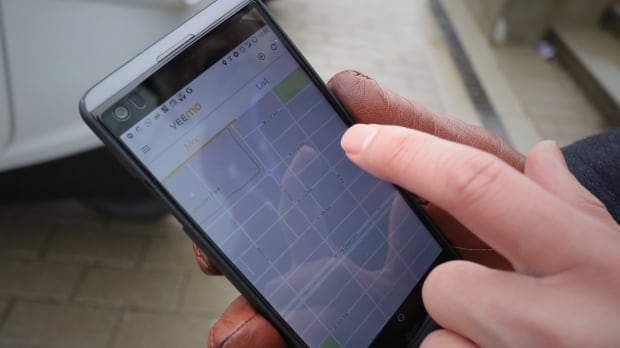 Veemo users need to download an app and sign up to start taking the vehicles around the UBC campus. (Rafferty Baker/CBC)

Alex Bigazzi is an assistant professor in the civil engineering department. He and some grad students are interested in how electric vehicles like these displace other modes of transportation.

“Ideally we want to get people out of private cars, for the most part, so we want to look at how many of these Veemos are displacing auto trips, instead of walking and cycling trips,” said Bigazzi — though he admits that in the limited pilot, few of the trips would have otherwise been taken in cars.

The team is also designing Veemo user surveys to get additional information. 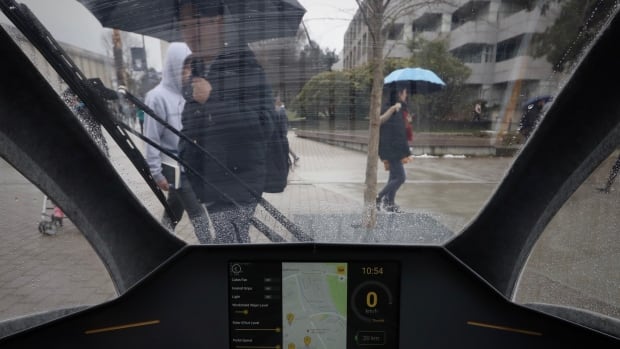 Once inside, the enclosed vehicle gives the rider shelter from nasty weather. (Rafferty Baker/CBC)

Bigazzi and his team have already been part of the Veemo beta test, so they’ve had the chance to pedal the machines around campus for a bit.

“It’s great, it’s actually quite a lot of fun to ride, it’s fun to get that boost when you’re pedalling,” he said.

“If I want to hop over to the grocery store and get some snacks or lunch whatever, it also serves well for those trips.”

Both Bigazzi and Paz hope the five pilot vehicles don’t get damaged, or misused by the student population, especially after something like a late night at the pub.

“It’s not like clowns: ‘let’s see how many we could get in there,'” said Paz. “This is for one clown and all his clown toys.”